Things have happened. Literary things and I haven’t been sharing them here. You know how you’ll have an experience that’s so good you hold on to it and just roll around in the yumminess of it by yourself? I wish I could use that as my excuse, but I simply haven’t made time to write for myself.

First there was the Hurston/Wright Nominee reading and the Legacy Awards.

I grabbed this picture from Twitter. I was in the line for food when this was taken.

It felt fantastic to be in the room with so many professional Black writers. And Junot Díaz was there, but I was a big chicken and said nothing to him.

The nominee reading at Busboys was more intimate and just as enjoyable – partly because I was able to be in jeans & Chucks instead of a dress & heels. It was also cool to live tweet the event for H Dubs. 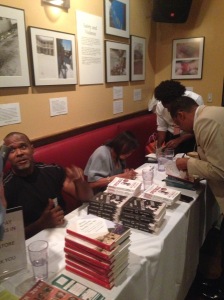 The following week I was back to Busboys & Poets to listen to Jason Reynolds and Daniel J. Older talk about books and their writing lives.

Listening to them talk was like ear hustling on a good literary conversation between two friends.

I was right there when Bill O’Leary took this one, if you look close you can see my name on the post-it

By the way, I asked Jason & Daniel what poetry they were reading. For Jason it was Safiya Sinclair’s Cannibal…and I can’t remember what Daniel said. Aargh. Maybe Martín Espada?

And then, there was the first HTL Book Club meeting! 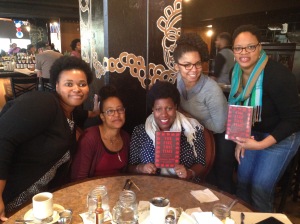 We discussed The Fire This Time and it felt like a safe space to talk about things that I would normally hold in (or only talk about at home). I’d like the group to grow to at least ten solid members, but I was overjoyed with our small group of five, six if you count our virtual member on Google Hangouts. 🤓

On another not so literary side note, but sorta is literary: I went to the Blacksonian.

And I made a special stop to the library inside. It’s not open yet, but I made googly eyes at it. 😍  I might have even said a quick prayer.